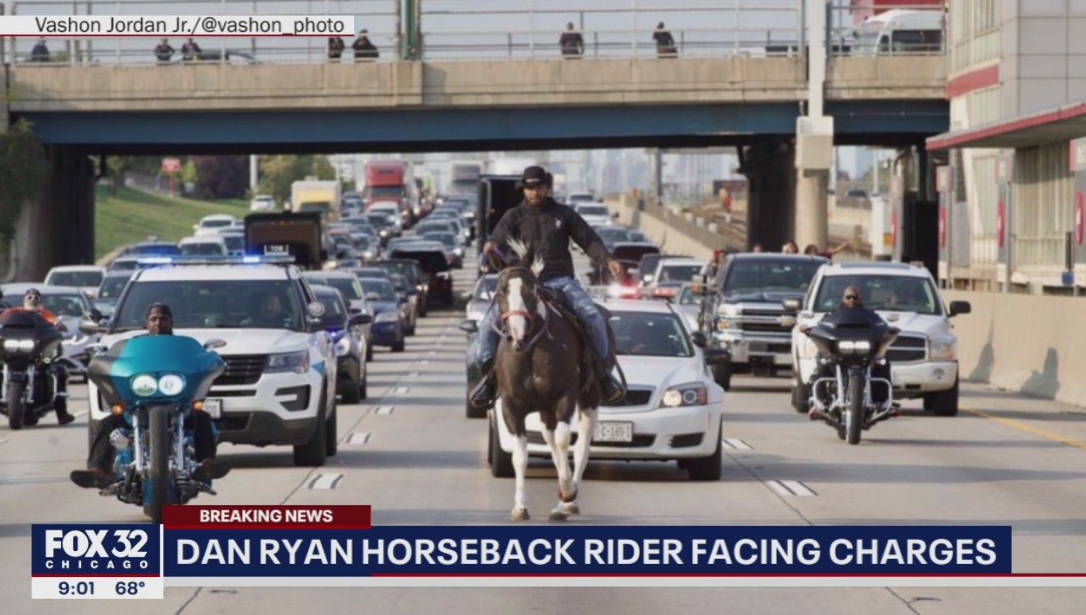 A Chicago man known as the “Dreadhead Cowboy” was arrested Monday after riding the Dan Ryan Expressway.

The rider, real name Adam Hollingsworth, 33, was caught on a video that was surrounded by motorcycles and was followed by police. He was charged with reckless behavior for disobeying a police officer and for crimes against government-sponsored property, police said.

He was accompanied by a phalanx of motorcyclists as he rode his horse for several miles, sometimes at a gallop, in the southern lanes of the dual carriageway. On a Facebook live feed while driving, Hollingsworth said he wanted everyone to know children’s lives are important.

“Until we understand that children̵

7;s lives are important, nothing else matters,” he said on Facebook Live before hitting the highway. “We are able to shut down all of Dan Ryan.”

In the past, Hollingsworth teamed up with Mayor Lori Lightfoot to stand up for the census completion, but her office distanced itself from the “stunt” in a statement.

“There is a right and a wrong way to draw attention to issues of great concern, and this stunt was clearly the very wrong way,” said the Chicago Sun-Times statement.

State Police said they had received several calls around 4:20 p.m. regarding a man riding a horse south on 47th Street. Officers arrived at 71st Street and saw Hollingsworth “surrounded by several motorcycles and vehicles in the local lanes” on the interstate, according to a statement from the Illinois State Police.

“He shouldn’t have been on a horse on the expressway,” a state police spokesman told the newspaper.

Hollingsworth had previously met with state and Chicago police on September 9 over a planned protest on the Dan Ryan Expressway. His application was denied because the authorities said it was dangerous and illegal “for pedestrians to access the expressway in this way,” state police said.

After he was arrested, soldiers secured the horse, which was bleeding from the left hoof, an injury to the right hoof, and wounds on the right side of the saddle, the statement said.

At the time, state police said another man, Darron Luster, 55, from Chicago, was trying to “gain control of the horse.” The officers asked him to release the animal, which Luster refused, and he was arrested, according to state police, the arrest has been hindered and resisted.

Luster refused medical treatment and said he was only getting into a patrol car, “not [an] Ambulance, “said the police.

The horse was taken to Animal Care and Control for treatment.