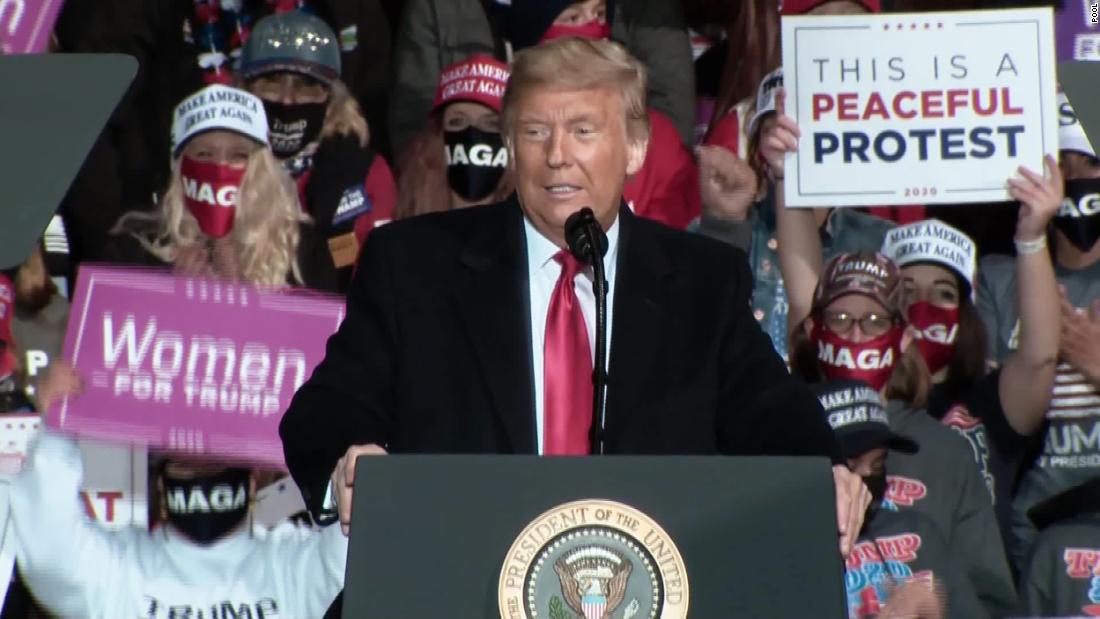 Trump made numerous false or misleading claims at his rally on Tuesday in Johnstown, Pennsylvania, his second rally full of falsehood since he was hospitalized with the coronavirus.

We’ll go through the log, but here’s a quick summary.

As at his rally on Monday in Sanford, Florida, Trump made unfounded claims that Biden supported political positions that the former Vice President does not really hold.
Trump lied, for example, that Biden’s plan would “destroy protection from pre-existing conditions”. Trump is the one trying to get rid of Obamacare, including the protections the law put in place for people with pre-existing conditions. Conversely, Biden is committed to maintaining and empowering Obamacare, including protection from pre-existing conditions.
Trump also warned that Biden would “ban”; private health insurance plans. But Biden has vociferously opposed proposals to end private insurance, suggesting instead a “public option” that would allow people to voluntarily opt for a government insurance plan.

Trump’s claim is misleading to the point of absurdity. Biden did not make a decision of his own to leave Pennsylvania. His family moved from Pennsylvania to Delaware, where his father found a job when he was 10.

Trump offered another dishonest rosy assessment of the state of the coronavirus pandemic.

He claimed that we are “rounding the turnaround” and not explaining what that means. And he said, “My plan: we’re going to destroy the virus very quickly. It’s already happening. It’s happening.”

It doesn’t happen. The number of confirmed new cases and hospitalizations in the US is increasing. There were 52,406 new cases as of Tuesday, according to the Johns Hopkins University. At the time Trump spoke, 33 states saw cases this week increased from last week.

This would have been an exaggeration even if you had stopped the clock in February. (At this point, prior to the March pandemic-related crash, 483,000 manufacturing jobs were created during the Trump presidency.) But now the claim is completely wrong. As of September, 164,000 manufacturing jobs had been lost since Trump took office.
Trump also falsely claimed that President Barack Obama stated that “you will never produce production orders”. Obama didn’t say that. Obama said that at a town hall event in 2016 something Manufacturing contracts were finally dropped from the US – but he also bragged about how many new ones were created in the US.

Trump made a number of false claims about NATO.

He claimed he was responsible for securing an additional “$ 130 billion a year” in other countries’ military spending. According to NATO, the total increase between 2016 and the end of 2020 is $ 130 billion, not $ 130 billion per year. (NATO gives Trump credit for the increase, but it’s worth noting that spending has increased since 2015, before Trump took office.)
Trump said NATO members before him “didn’t pay their bills” and “were criminals”. That’s not how NATO works. While the Alliance’s goal is to have each member spend 2% of GDP on defense, failing to meet this goal does not result in bills or debts.

And Trump claimed that “Obama sent them pillows”. This appeared to be Trump’s usual reference to Obama’s military aid to Ukraine, not contributions to NATO itself – but it’s inaccurate nonetheless. Obama refused to send deadly aid to Ukraine, but he did send armored humvees, counter-mortar radar, night vision goggles, drones and other military supplies.

For the second year running, Trump claimed Mexico was paying for its border wall.

“And Mexico is paying for the wall, by the way. You know that. I said it. They hate to hear that. But they pay,” he said.

That’s just wrong. The US government paid for the wall – some with billions of dollars that Trump controversially confiscated from other programs. The White House declined to comment on Tuesday when we asked for an explanation of how Mexico allegedly pays.

Trump said vaguely at Tuesday’s rally, as he did on Monday, that Mexico will effectively cover the cost of the wall by imposing a “fee” on cars crossing the border. (He called it a “border tax” on Monday.) But he has not released details of such a proposal, and the White House again declined to explain on Tuesday.

Minnesota and the National Guard

Trump celebrated as the National Guard suppressed violent protests in Minnesota following the assassination of George Floyd. However, he complained that it took “10 days” for the state to call his administration.

The Democratic governor of Minnesota, Tim Walz, activated the National Guard himself – two days, not ten days after the first violence. You can read a full timeline here.

The Presidential Debate and the Expression “Law and Order”

That’s ridiculous. Biden said in the debate that “everyone is for law and order”. Then he added, “Law and order with justice where people are treated fairly.”

CNN and its cameras

Trump reverted to one of his favorite lies, calling CNN “fake”. He then said he saw the lights on CNN’s camera go out, suggesting that CNN stopped recording because of his bump.

Trump’s claim, as always, was pure fiction. CNN doesn’t turn off its cameras when insulting CNN. And CNN photojournalists at its rallies don’t even use a light that would show Trump whether they’re recording live or broadcasting.

Trump repeated another of his favorite lies, stating, “We passed VA Choice.” Obama signed the Choice Act in 2014; It was an initiative by two senators that Trump has often criticized, Bernie Sanders and the late John McCain. What Trump signed was the VA MISSION Act of 2018, which expanded and modified the Choice program.

Trump has made this claim more than 160 times.