Guard against murder charges while shooting at the Denver Rally, says DA 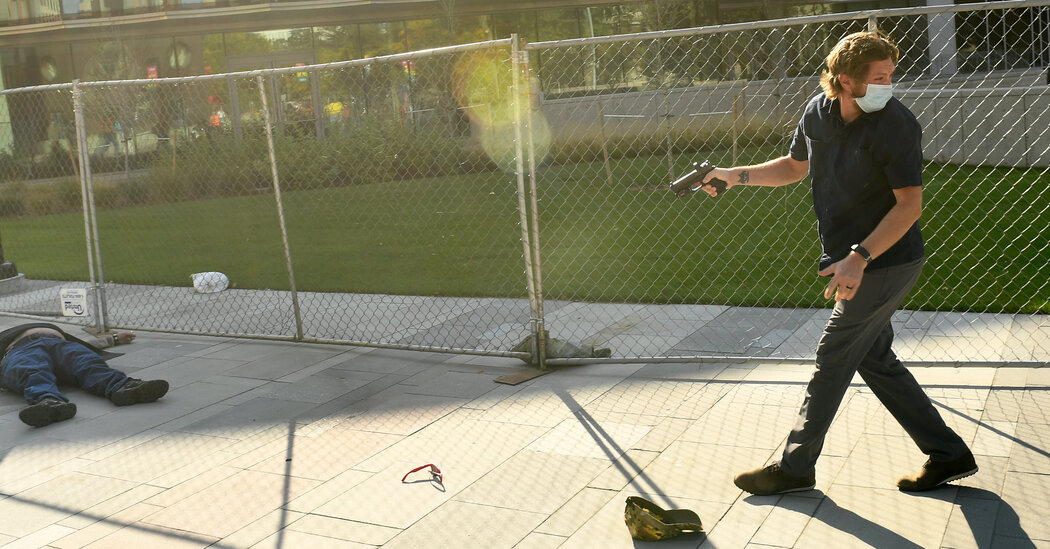 A security officer for a television news station in Denver who was arrested in the fatal shooting of a man after a right-wing rally last weekend is charged with second degree murder, the local prosecutor said Thursday.

If convicted, the 30-year-old security guard Matthew Dolloff faces a prison sentence of up to 48 years. The charges will be filed in Denver District Court on Monday, the Denver District Attorney’s Office said.

The filming, captured in videos and photos that were widely featured in news reports and social media, took place on Saturday after a “Patriot muster”

; was completed. As people left the rally, they encountered left-wing counter-protesters south of Civic Center Park near the Denver Art Museum.

According to an arrest warrant, the fatal encounter began around 3:30 p.m. when the victim, Lee John Keltner, 49, argued with another man near the park.

Mr. Keltner abruptly broke off this argument and confronted Mr. Dolloff. Moments later Mr. Keltner slapped Mr. Dolloff with his hand on the side of the head. Mr Dolloff pulled a gun from his waistband, aimed and fired a single shot when Mr Keltner released a mace-like substance, police said.

Mr. Keltner fell to the ground and the police arrested Mr. Dolloff, “who was still holding a semi-automatic pistol in his hand,” according to the arrest warrant. Photos from the scene show Mr. Dolloff putting the gun on the ground and putting his hands in the air while the police walk up to him.

Mr. Keltner was taken to the Denver Health Medical Center, where he was pronounced dead at 4:05 p.m., police said. On Monday, the coroner ruled that Mr. Keltner’s death was a murder, according to prosecutors.

On the afternoon of the protest, a Denver news channel 9News identified the man arrested in the shooting as “a private security officer hired by 9News.” The broadcaster added: “It has been customary for a few months for 9News to employ private security guards to protect employees during protests.”

The news channel reported that it had signed a contract for the services of Mr Dolloff through Pinkerton, a private security agency. This company informed the station that it did not employ Mr. Dolloff and declined to name the company that did so.

Doug Richards, an attorney for Mr. Dolloff, did not immediately respond to phone and email requests for comment Thursday night, but told the Denver Post that his client “did everything he should do and everything he did was trained. ”

He also said it didn’t matter if his client had proper permission to do this type of security work before the shooting.

“Even if he didn’t have the special Denver security license, that didn’t stop Pinkerton from putting Matt in this job, and it doesn’t change the fact that Matt was defending himself,” Richards told the News Organization.