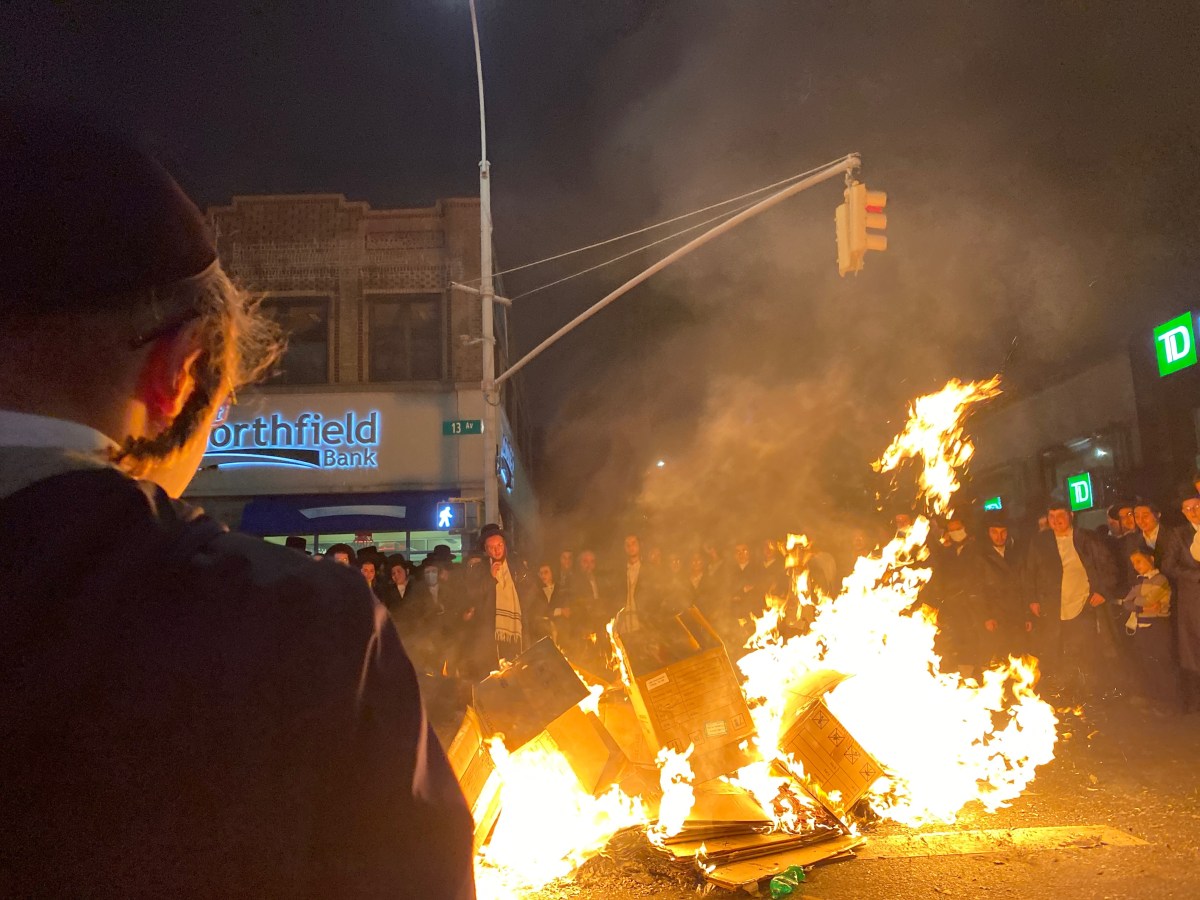 Hundreds of members of the Borough Park Orthodox community took to the streets Tuesday night resisting orders to disperse and light a fire to protest new government restrictions on synagogues, schools and non-essential businesses in the area during a COVID- 19 increases were imposed.

A large crowd huddled on the corner of 50th Street and 15th Avenue at around 9 p.m. when the parish activist, Heshy Tischler, Governor Cuomo and Mayor de Blasio overcame orders to completely close schools and house places of worship to certain people to restrict COVID-19 hot spots.

Much of Borough Park is subject to these – the most restrictive – measures, which also shut down non-essential businesses. The extent of the restrictions, which are divided into three color-coded categories, depends on the diagnostic data of the coronavirus.

7;s called civil disobedience, we can defend ourselves,” said Tischler to the crowd after he had torn off his face mask. “Do not allow them to torture or scare you,” he said, referring to the elected officials.

The closings must come by Friday at the latest – although a spokesman for de Blasio tweeted that they would likely begin on Thursday – and last at least two weeks.

Alderman Kalman Yeger later showed up at another protest on 13th Avenue, according to Boro Park News.

There the lawmaker told the crowd, “We are not being deprived of the right we have in America, like everyone else in America, the right to observe our religion.”

The protests were teeming with protesters closing 13th Avenue to vehicular traffic later that night.

Things also turned unsettled when the crowd lit a garbage fire after midnight at the intersection of 46th Street and 13th Avenue, chasing away two city sheriff’s deputies who had responded.

The defiant crowd sang “Jewish life is important” as they asserted themselves.

Around 1:30 a.m., FDNY firefighters and police extinguished the flames to the horror of the demonstrators.

Earlier that night, Yeger was one of four local Jewish lawmakers to issue a joint statement criticizing Governor Cuomo for the edict.

“We are appalled by Governor Cuomo’s words and actions today. He has decided in favor of a scientifically and constitutionally questionable closure of our communities, ”says the declaration by Yeger, Senator Simcha Felder, MP Simcha Eichenstein and City Councilor Chaim Deutsch.

“His government’s total lack of coordination and communication with local officials has been a persistent problem since the pandemic began, especially recently as we face this boom.”

Lawmakers said the Cuomo government, despite representing COVID-19 hot spot neighborhoods, left it in the dark ahead of Tuesday’s decision.

Also addressed by lawmakers was Cuomo’s decision to show PowerPoint images of the Jewish community in New York, which gathered en masse during his press conference on Monday.

“Governor Cuomo’s decision to showcase a particular religious group with a photo slideshow to highlight his point was outrageous.

“His language was dangerous and divisive, and had the implication that Orthodox Jews were solely responsible for the increase in COVID cases in New York State,” elected officials said.