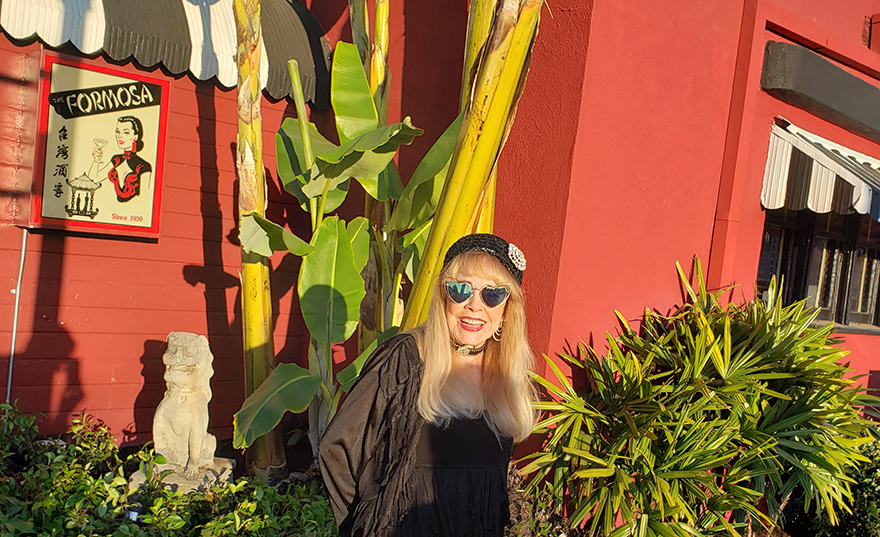 Oscar-nominated for her role in Come Back, Little Sheba Terry Moore, 90, has only one dream left 66 years ago. She hopes to receive another nod for her final role in the upcoming film, Silent Life Vladislav Kozlov's drama about the silent film icon Rudolph Valentino, which is due to be released next year (more information on the film here).

Moore dates from the film's Golden Age and has appeared in more than 80 films. She has worked with legends John Wayne, Cary Grant and Burt Lancaster and quickly made friends with James Dean, Elvis Presley and Marilyn Monroe. Her romance with Howard Hughes led her to one of the first female jet pilots. It has since risen rapidly.

Senior Planet: What attracted you to Silent Life ?

TERRY: I loved this story and there are not many great characters for 90-year-olds. I continue to work. That's the most important. I started when I was ten and have been working solidly for 80 years. When the roles are good, I refuse nothing. I love Vlad Kozlov, who offered me this role. He is a wonderful director and author. He's the best I've worked with since Elia Kazan.

Senior Planet: Are you looking for an Oscar nomination for Silent Life ?

TERRY: I've been nominated before ̵

1; but Silent Life is the kind of role for which you could win .

Senior Planet: They star in the role of Isabella Rossellini in Still Life . Did you know her mother Ingrid Bergman?

TERRY: Yes. I have worked with Ingrid in George Cukor's Gaslight [1944] . She looks so much like her mother.

Senior Planet: You've certainly worked with legends. Can you tell us about some?

TERRY: Jimmy Dean was nice, but very boring. Today people think Jimmy is a big star like Marlon Brando – but if Jimmy had lived as long as Brando, he would never have touched Brando. He was a sweet boy, but he just wanted to be like Brando. Elvis was a dream. I even sing a bit "Are You Lonesome Tonight?" In Silent Life my mother's favorite song. Cary Grant flew my mother and me to Vegas to play Elvis. He sang to my mother "Are You Lonesome Tonight?" And put his scarf around her neck and kissed her. Elvis has just lost his mother, whom he loved so much – so he gave all this love to my mother. I loved Marilyn. We worked with the same acting teacher and I took her home for dinner because she was as lonely as an orphan. It was much brighter than people thought. I never followed her end because it was too sad for me. I loved working with Tyrone Power, a Marine, though he never talked about his bravery. He shot down more Nazi aircraft in the Second World War than any other American. He was an incredible and beautiful man, both on and off the screen. (I was No. 1 in the Korean War, and my biggest thrill was entertaining soldiers, I'm the most patriotic person you'll ever know.) [194559006] Senior Planet: You were such a breaker – not only professional but also one of the first women flying a jet plane. What drew you to heaven?

TERRY: The love of my life was Howard Hughes, one of the first men who flew around the world. He was fascinating. I always wanted to fly; build model airplanes as a child. And then I learned how to fly a jet. I wanted to be the first woman in space. I would do it anyway if given a chance.

Senior Planet: You have Leonardo DiCaprio for his role as Howard Hughes in The Aviator ?

advice] TERRY: I'm crazy about Leo. He is such a dear person. These young actors are just as wonderful today as the ones I worked with during the Golden Age. I loved working with Matthew McConaughey on True Detective. We remain good friends and had the same acting teacher, Penny Allen. When Penny died, Matthew stayed with her and got her nurses around the clock. We both visited every day and loved them to the end. She told Matthew that he would get an Oscar – and told me that it was me. I'm still waiting!

TERRY: I think kindness is the most important thing. Treating people the way you want to be treated. And not to clap. Gossip is one of the most dangerous things in the world, so I never do it. If you've lived as long as I do, you recognize that as truth.

Senior Planet: What's your secret to aging with attitude?

TERRY: I was educated Mormon without smoking or drinking. I ate well and played basketball. I train every day and do a boot camp and yoga twice a week. I also spend half an hour a day on a road bike in my living room. You can stay young forever if you train and eat properly.