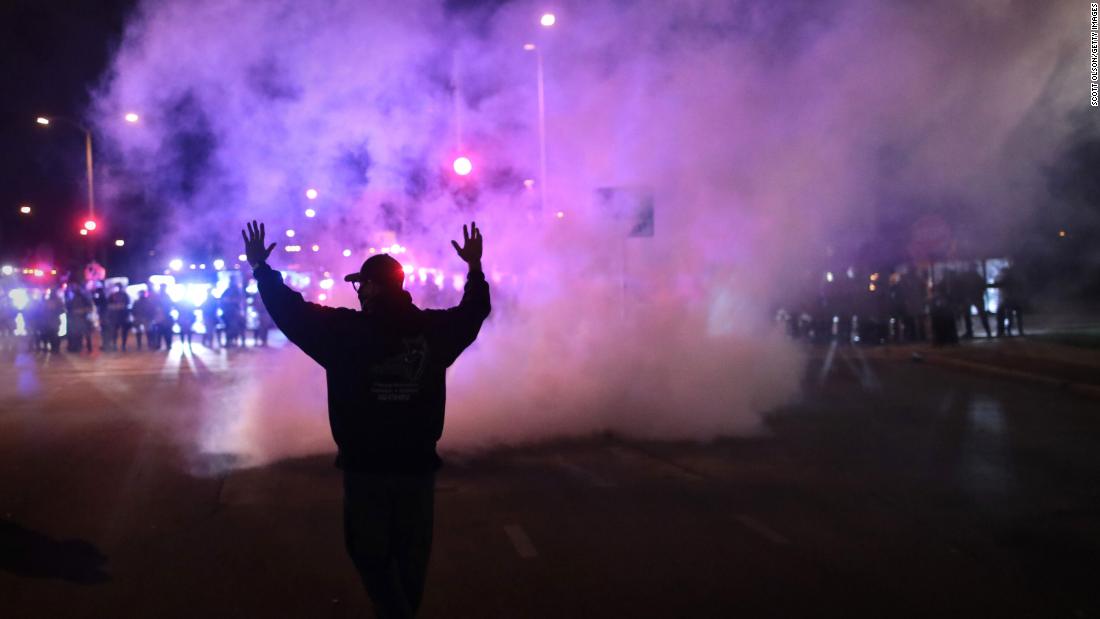 “Police officers were beaten with bottles and tear gas used to stop the illegal gathering,” Wauwatosa police tweeted on Friday shortly after the 7pm curfew went into effect.

Police reported Friday that protesters were removing dumpsters from companies and putting them on the streets.

Police and National Guard are working to patrol Wauwatosa and there is a curfew every evening from 7:00 p.m. to 6:00 a.m. through Monday.

The confrontation between police and protesters on Friday The arrests of Alvin’s mother and sisters also followed on Thursday night, according to the family̵7;s lawyer, Kimberly Motley.

Tracy Cole, Taleavia Cole, Tayudah Cole and Tristiana Cole have been taken into custody, Motley told CNN. A police spokesman confirmed to CNN late Friday that members of the Cole family had been arrested.

Alvin’s mother, Tracy Cole, who uses a cane, was rushed to hospital with a large bump on her forehead and an injured arm, Motley said for being “roughly handcuffed”. Tracy and Tristiana Cole were later released from the hospital, Motley added.

“It is unclear why they were arrested. At the time of their arrest, they were in their vehicle – they were pulled out of their vehicle,” said the lawyer. “Tracy – who walks with a stick who is a peaceful protester – was essentially attacked and then taken to the hospital by police, resulting in injuries.

“Her car was confiscated. Taleavia Cole and Tayudah Cole were taken to two different counties in two different cities after they were arrested. All were released without charge,” she said.

A total of 24 people were arrested on Thursday, and two of them asked for medical help, Wauwatosa police said in a press release on Friday.

A police spokesman told CNN Motley that Tracy Cole was also receiving medical treatment, but her arm was not broken. The police did not have the details of the second arrest, which required medical attention.

Alvin Cole was shot dead outside a shopping mall in Wauwatosa on February 2 when officers responded to a disturbance call, police said. Barry Weber, Wauwatosa Police Chief, told reporters at the time that Alvin fired a gun before an officer returned fire.

Milwaukee District Attorney John T. Chisholm wrote in a letter to the Wauwatosa Police Chief that there was “sufficient evidence” that officer Joseph Mensah believed lethal violence was necessary and that “that belief was objectively reasonable”.

The prosecutor in his report said Alvin had a stolen 9mm pistol when he was at the mall and exhibited the pistol during an argument with another patron.

“He was found by Wauwatosa police officers in the Mayfair Mall parking lot, ran away from the police, released the gun and was ordered to hand over the gun,” Chisholm wrote. “He didn’t surrender the gun and was shot at by Officer Mensah, causing his death.”

Chisholm posted an eight-minute compilation video of the night Alvin was fatally shot.

The video shows an officer approaching something and aiming a weapon. Someone says “drop the gun” before a shot is fired. Alvin is not in the footage at the time of filming. What sounds like several shots can be heard soon after.