Write History for the Crowdsourcing Project of the Library of Congress 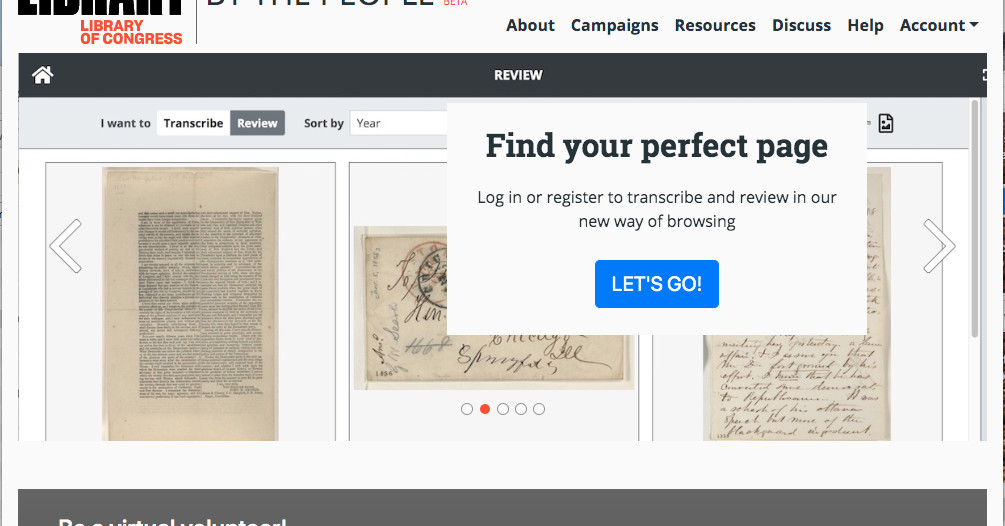 If you're fascinated with history, the Library of Congress has a job for you – well, it's an unpaid job, but a few minutes (or hours) of your time is worth it.

The library is asking everyone with a computer and interest in historical documents to participate in a crowdsourcing project called By the People, where volunteers transcribe several thousand documents from the library's vaults. According to the website, the purpose of the project is "to improve the search, readability and accessibility of handwritten and typed documents for those who can not fully see or read the handwriting of the original documents."

Online Crowdsourcing is not new; There have been academic projects such as SETI @ home (a radio telescope experiment running since 1

999), government projects such as Citizen Archivist of the National Archives, and crowdsourced traffic reports on apps like Waze.

By the People, interested people invited volunteers to transcribe digitized images of personal letters, diaries, receipts, speeches, and other documents of famous and lesser-known individuals involved in a variety of historical movements, mainly from the 19th and early 20th centuries Century. Launched in the fall of 2018, By the People has divided its documents into various "campaigns" – such as the Civil War, the Abolitionist Movement, and the Suffragist Movement – so you can pick the topic that interests you most. You can transcribe yourself to check someone else's work or just read.

The UI for the transcription process is well designed. Documents are displayed in the left half, where you can zoom in and move around in order to get the best view. This is particularly useful for the cramped handwriting that is popular with 19th century writers. In the empty area on the right, type in your transcription.

These documents provide insight into the important issues of the time and the small details of everyday life. You may find that you are transcribing a typewritten page by Mary Church Terrell, an African-American writer, orator, and activist of the twentieth century, in which she uses the arguments of a "Mr. Page ", which appeared to have been written to defend the lynchings so frequent after the civil war in the South. You might also try deciphering Civil War Nurse Clara Barton's handwritten diary describing her feelings for a new home and how much she has paid for a local post office box.

If you just want to see a few of the documents, or even try transcribing, it's easy to get started. All you have to do is go to People by topic page and click the "View projects" button of the campaign you're interested in. Each campaign page will display the background of the progress you'll see, and how many contributors have volunteered for that particular campaign, and how many documents have already been completed, need to be reviewed, are in progress, or have not yet started , There are many documents for all: at the time of the publication of the campaign "Voting: Women fighting for voting", there were 48,380 documents in their crowdsourced archive, and 23,363 were not claimed.

Among the statistics are rows of icons representing each set of documents, along with a brief explanation of who wrote them and a bar indicating how many have been completed. You can click on any quantity that interests you, select a page and immerse yourself.

In short, if you're even interested in how political activists fought, wrote, and lived a century ago, then the By the People Project can be a fascinating rabbit-building project to fall into.